Paradiso Canto 31: The Ardor and the Peace

At the risk of sounding silly (and perhaps anything said in the face of such a beatific vision as Dante displays in these final cantos would indeed sound such – n.b 31.42)…SO, at the risk of sounding rather silly, does anyone else see what I see here? This is what I’m talking about: Up to this point, Dante’s preference for lots of bird images. And here, bee images. Birds and bees. Ardor. Living flames. Eyes “fixed and burning / with passion on his passion” (31.139) Up…in heaven?

And what is the visage of heaven? A white rose. Indeed, a vision whose beauty and the buzz surrounding it suggests the beatitude of creation and recreation and reproduction: bees do it, Bea’s done it. Create, that is. Or, we might say, re-create. Beatrice has recreated, as a reflector of that love that emanates from God, the very soul of the pilgrim. The Canto seems full of such images that bespeak the height of human love, and all the fruit and beauty that proceeds from it.

We begin with a spousal image. Through his blood, Christ has “espoused” those whom he has redeemed (31.3). What is heaven about? It’s not some antiseptic abstraction. It’s a place where exists what we desire most, suggested by what generates “ardor” in this life: to create. To love. With all the attendant passion we can muster, and with all the resultant beauty.

But such images are also balanced by what seems to be ardor’s opposite: stillness. Contemplation. And here, am I the only one a bit disappointed: that Dante sees the most beautiful site his newly-recreated senses could possibly take in (like a Barbarian staring at Rome for the first time), only wanting to share that vision with his honey. But when he looks over to her, poof, she’s gone. Cold shower. Who instead? An “elder.” Wow, what a…um…disappointment.

Beatrice leaves Dante, indeed retreats from him at the greatest imaginable distance (in earthly imagination, to wit: as far as the stratosphere is from the Mariana Trench). But immediately Dante learns that heaven is the place where love exists as passionately at a distance, as it does up close and personal. Dante learns that distance cannot abate the radiance of the Bea-tific smile. It’s a place where distance and nearness, time and eternity, ardor and stillness are conflated into one, God-centered wholeness.

Perhaps the theme of this Canto could be summarized by what the angel-bees are doing up there in their heavenly hive. To fly close to God is to experience both qualities at the same time: “the ardor and the peace.” (31.17) In heaven, the soul experiences both desire and its fulfillment at the same time.

Somehow, I read this Canto and I can’t help but think of that other modern poet whose poetry is so stamped with the imprint of Dante: T. S. Eliot, he who speaks of that Still Point from which all of this beauty emanates. Check it out:

I suppose in a way this is why for me Buddhism both holds so much appeal, and also at the same time, in my experience of it, convinces me of why I’m a Christian. I love Buddhism for its core ofpraxis, of contemplation, of seeking the still-point of the turning world, of cultivating the peaceful mind through the practice of equanimity. But I guess I can’t leave the ardor behind.

What I love (ardently) about Dante’s imagery in this most beautiful Canto is how it implies that both are joined in that beautiful vision. The ardor and the peace. Both, like the two natures of Christ, the human and divine, are joined in one God-fulfilled Gestalt. 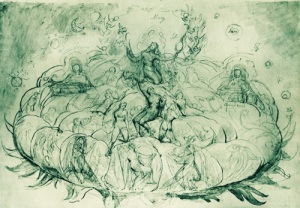 From U. Texas "Dante World", The White Rose

We meet in the Empyrean Dante’s trinity: the impenetrable light of the intellect, the love of the will and the joy of fulfilled desire. So too the “soldiery of Paradise”—the otherwise un-imaginable glorified bodies of believers (you remember, no doubt, the poet’s request in XXII, “assure me if I am capable of receiving so great a grace, that I may behold you in your uncovered shape”). Dante’s request now fulfilled, Heaven is borne open, and the resurrection of the body and life everlasting unfold like a morning rose before his eyes. Neither time nor space obscures his vision. The particular is subsumed by the eternal. Neither gravity nor the laws of physics govern this body. God’s love flows horizontally like a river and vertically like a beam of light. Indeed, it is only the unmediated, direct will of God, whose grace extends to such great depths that joy is experienced as a physical reality—joy takes on breadth, height, width and quality, that governs this place.

“Thou has created us for thyself, and our heart cannot be quieted till it find repose in thee”, writes Augustine. Wide-eyed Dante stumbles across that point in space-time where souls are quieted in eternal peaceful awe, “A light there above which makes the Creator  visible to ever creature that has his peace only in beholding him.” God is beheld and the elect are fulfilled.

Dante sees only a few seats remaining, such a wicked age is his (and ours), but God’s amphitheater, it seems to me, will always be adding more seats and growing the circumfrunece of the bloom, for God’s is an outward-working, ever-growing, ever-inviting love, a kind of love that overflows with the finest vintage a man can imagine.