Five cantos in:  are we in hell yet?  Though we’ve reached the place where no thing gleams, we’re still distinctly flame-less.  I sense that Dante’s art lies in his ability to keep that question ticking in his reader’s brains:  Are we in hell yet? There seem to be several ways in which he holds one of our eyes fixed on the terrible and the other fixed on the terrestrial.  We are never fully unmoored and cast into the shadow; there’s always a creaturely tether, an ardent humanistic vine that keeps us guessing, keeps us reevaluating our coordinates.

Entering the second circle, we get a benvenuto from Minos, that ‘connoisseur of sin’ (aren’t we all!).  As he whirls out his caudate verdicts, we think, “No, no, Toto, we are not in the well-lit, enameled, philosophically opulent Kansas of the first circle anymore; we are in Hell.  Look at that guy!”

Furthermore, just as we pass by the mythological monster we hear the ‘hurricane of Hell’, the wailing winds and ‘blasts of sorrow.’  Just as light has become mute, the relatively mute sighs have been amplified to blasts.  Alas, the weeping and gnashing.  O Hell, Hello!

Yet, just as our eyes adjust to the darkness, the birds come out to play.  Dante invokes winter starlings, cranes, and—most incongruously of all—doves to illustrate the particular kinetic energy of the carnal sinners.  Presumably because passion carried them away beyond reason on earth, these buoyant damned are buffeted by the winds like a flock (though some, mostly literary, are more stately than the masses).  Though Dante describes the air here as ‘malignant’ and ‘black’, the avian similes imbue it with at least a modicum of grace, as the reader envisages the dignified stature of cranes, the starlings’ gloss, and the symbolic treasury of the dove.  In short, even in Hell Dante doesn’t allow us to forget the sky.

This tension reaches its apogee with Francesca and Paolo.  Not surprisingly, the ‘merciless weather’ stills for these two doves.  I don’t know about you, but the image of a tormenting tangle of infernal lovers doesn’t come readily to mind.  I see Chagall: 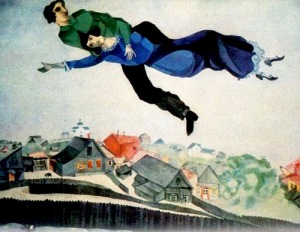 In a groundbreaking feat of down-to-earthness, Dante gives this woman, a contemporary of his, the literary spotlight over the more lustrous love-lost like Cleopatra, Dido, or Helen.

Francesca’s eloquence and politesse, I’ve read, have driven many commentators to go through the critical pains of exculpating her.  Her short discourse on love (note the triple Amor…Amor…Amor) is a reflection of Dante’s own earlier poetry, the Love poetry of the dolce stil nuovo, so one can really register the earnestness of his pity, and his final swoon can be read as piteous relief that he, unlike the two lovers, did not stop reading the book right there.  That he is still reading…We, in fact, are, in a sense, reading his continued reading.  Are we fully in Hell, yet?  Unlike Minos, we don’t have a reliable adjudicatory appendage to judge what stands before us—like Dante’s pilgrim, we have to keep close to the ground.  And anyway,  more often than not, we’re down there chasing our own tails.